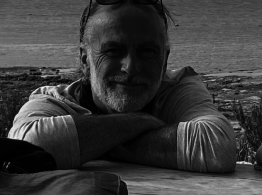 Paul Bell is a Scottish born artist based in Beaconsfield, Buckinghamshire.

An unusual contrasts in styles underpins Pauls current work, comfortably switching between the mediums of Oil and Watercolour and and indeed genre from detailed architectural watercolours to large abstract expressionist paintings.

Paul studied at Glasgow School of Art in the 80’s and worked for anumber of years as an interior designer before specialising in architectural illustration, but a desire to paint in oil, free from constraint was always his ultimate ambition.

Pauls’ often quite large paintings take their inspiration from the abstract expressionist movement of 40’s and 50’s New York as well as the  renowned Scottish colourists.

In 2015 Paul won the inaugural TV art programme ‘The BBC Big Painting Challenge' which provided a launch pad for him to fully concentrate on painting. The exposure of being on TV along with work being exhibited in Tate Britain raised his profile as an emerging artist. Prior to that in 2014, Paul was shortlisted for the prestigious BP portrait award. Since then Paul has exhibited and sold consistently here in the UK as well as Europe the USA and New Zealand.